9th November, 2012: A team comprising of Diptoshree Basu, Shivain Vaidialingam, Purushottam Anand and Shanta Chirravuri visited Jitholi along with Gayatri Bedi and Madhav Rao, representatives of General Electric (GE), on 9th November, 2012. As always, Prof. M.P. Singh accompanied us for the visit. The second and final aptitude test was conducted for the students of Kalpataru Vidyalaya. The number of students appearing for this test was significantly lower than the previous test with the number falling from 51 to 27. Also, one of the students appearing for this test had not appeared for the first aptitude test.

As the students were already aware of the role IDIA plays in assisting with training for the admissions to National Law Schools, we started the session by interacting with the students to make them comfortable. The students were asked their reasons for wanting to become a lawyer. Recognising the lack of access to legal services for villagers, most of them wanted to come back to their village and provide legal assistance to anyone who needed it. After this round of interaction, we handed out the test to everyone.

The aptitude test comprised of 45 questions of 1 mark each and the duration of the test was 1 hr and 15 mins. The level of English in the test was relatively higher than the English that the students were exposed to, in the course of their regular curriculum. Because of this, extra time was given to the students to complete the test.

Once the test was completed, the papers were corrected and marks for different sections were noted separately.

The students were then shortlisted for an individual interaction with us. The highest score was 31 out of a total of 45. All students who secured 17 and above were called for the counselling. Out of those who secured 16, two of them were selected based on their performance in the legal aptitude section of the paper. Therefore, a total of eight students were shortlisted by the end of this process.

We counselled each one of the eight students individually. All the students were informed about the role of IDIA and that they would be enrolled with LST at Meerut this year itself. The problem with most of the students seemed to be that even though they know basic English, they still lack in vocabulary and are not able to understand some words or phrases used in questions. Due to this difference in the level of English, the 12th grade and college going students were advised not to give the exam in 2013. They were instead told to focus on their boards and join/continue college next year while simultaneously preparing for the law entrance exams for 2014. Two of the students were apprehensive about being part of the programme because previously students were enrolled in IMS in Meerut which subsequently shut down and as a result their preparations were hampered. They expressed their concern over the fact that sensitisations had been conducted previously, however, no action had been taken subsequently, regarding enrolment or training. One of the students was also hesitant as his parents were against him appearing for the law entrance exam and wanted him to pursue engineering instead.

After speaking with all of them and giving them sufficient time to think about their options, a follow up call was made. During the next visit to Jitholi, the team resolved to collect the income certificates of the selected candidates. In order to monitor their progress and guide them, the team decided to plan a visit to Jitholi at least twice a month. Apart from this, the school should be provided with a subscription to English newspapers so that the selected students can improve their vocabulary and understanding of English along with being up to date on General Knowledge issues.

23rd December, 2012: A team consisting of Diptoshree Basu, Tania Sarcar, Nitika Dwivedi, Shanta Chirravurri and Shivain Vaidialingam visited Jitholi on 23rd December, 2012 along with Prof. M.P. Singh. Since our last journey to Jitholi (9th November, 2012) each of the shortlisted candidates were contacted to affirm their desire to pursue law. Unfortunately, three candidates voiced their unease and did not wish to avail of this opportunity. The other three scholars, namely, Himani, Sachin and Vishal, had in the meantime been enrolled in LST, Meerut and were attending classes regularly over the weekend. Donnie Ashok, an IDIA scholar, currently in his first year at the Gujarat National Law University, Gandhinagar facilitated the enrollment. Donnie had been residing in Jitholi during December and was engaged in tutoring the students in order to develop their computer and reasoning skills. We conversed with the three scholars and questioned their understanding of English Comprehension and Logical Reasoning. They were made to examine the relationship between synonyms and antonyms, which was quickly grasped. Questions relating to Number series and Alphabet series were posed and the students were able to easily solve them. We observed that the scholars however, do not have access to a national Engilsh newspaper and a national English magazine. Subscription to an English newspaper and magazine of wide circulation is imperative in order to enhance their general awareness. We resolved that these subscriptions shall be made in due course.

In addition to weekly classes at LST, Meerut, the teaching team shall visit Jitholi and address subject areas which the scholars find troublesome and discuss topics which require daily attention.

We hope that we are able to train these scholars within the short span of time and allow them to attempt CLAT 2013 itself. The team now hopes that with some guidance and rigorous training, these scholars will be able to hone their skills and make the best use of this opportunity provided by IDIA and further the objectives of inclusive education within law schools by securing entry to any of these institutions. 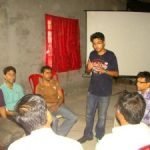