IDIA West Bengal Chapter commenced the academic year 2012-2013 by embarking on a weekend sensitisation trip to the district of Murshidabad. We had recently tied-up with Guidance Foundation, which has worked extensively in the field of children’s education in Murshidabad, and they were assisting us in this sensitisation. On Saturday, 7th of July, a team of 6- Arnab Basu, Ashutosh Shukla, Avinandan Kundu, Rishika Rangarajan, Sandra Susan Mathew and Sohini Chatterjee, left for Murshidabad. We boarded the Howrah-Malda Express at 3 pm and braced for a six hour long train journey to the erstwhile capital of the state of West Bengal. We reached our destination around 9:15 pm and were put up at the Guidance Foundation hostel. Tired from the journey, we called it a day.

The next morning, we were supposed to make our presentation to the students and sensitise them about law as a career and IDIA as an initiative which can help them. The presentation was to be held in the school hall. The sensitisation began at 11:30 am and we were pleased at the healthy turnout of around a hundred and fifty students. It began with an introductory speech by the CEO of Guidance Foundation, Mr. Haque, who introduced the six IDIA West Bengal Chapter team members to the students, teachers and parents. Following that, Arnab Basu, the Chapter Head of IDIA West Bengal, spoke to the children at length about law and IDIA. We also had a powerpoint presentation screened for the children, to make them aware about the innumerable opportunities that a career in law can throw open to them.

After the speeches, we divided the crowd into three groups. One group consisted of teachers and parents. The other two groups consisted of students. Two volunteers were assigned to each group and we answered questions and cleared doubts which the students, teachers and parents had. We explained to them that another sensitisation team would be conducting an aptitude test the next week, in order to select the meritorious candidates who would finally be trained by IDIA West Bengal chapter. The students were buzzing with questions about the MCQ format, the CLAT question paper format and the various kinds of law they can pursue in future. The sensitisation ended with distribution of registration forms for the aptitude test to all interested candidates.

This sensitisation trip was a very satisfying one. It was memorable to see the wonder etched on the faces of the children as they were told about one examination that had the potential to alter the entire course of their life. We are extremely thankful to Mr. Haque and Guidance Foundation for all the support and assistance they extended us. 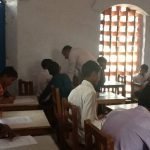