Our next interview in the IDAP interview series features David Lepofsky, a highly distinguished Canadian lawyer who happens to be blind. Born in 1957, David graduated from the Osgoode Hall Law School with honours in 1979 and obtained a Masters of Law from the highly prestigious Harvard Law School in 1982. Thereafter, up to 2015, David practiced law with the Ontario Ministry of the Attorney General in such diverse areas of law as constitutional, administrative and criminal law.

In addition to being a litigator par excellence, David has also served as a part-time faculty member of the University of Toronto since 1991 and a visiting professor at his alma mater since 2016.

He has also spearheaded several initiatives that have resulted in favourable court rulings and the passage of laws that have gone a long way in improving the lives of scores of Canadians with disabilities. In recognition of his transformative work, the Canadian Lawyer Magazine recognized David as one of Canada’s 25 most influential lawyers in August 2010.

1. First off, would you mind describing to our readers the precise nature of your disability?

When I describe it to people now, they say it sounds like the ice age! Law books throughout my course were recorded on audio tape. Volunteers would record handouts for me. Professors provided me material in advance so that it could be recorded. I went through law school just like everybody else. I would go through the recorded material and would dictate my notes on a separate tape recorder.

It is so much easier today! And not as hard as it was for a blind person back then. It was not difficult for me to study from tape recordings. However, back then, there were no laws preventing an employer from rejecting a candidate solely on account of their disability. Getting a job for a person with a disability was really hard back then. I did manage to get a job despite these difficulties.

3. How did you manage extracurricular, moots, exams and clinical courses?

I didn’t take any clinical courses simply because I was not interested in them. For moot court activities, my moot partner would read out material to me and I would argue relying on memory just like I argue today!

I was very involved with the debate club. Debating taught me to speak without research – I learnt to think on my feet! Much of what I learnt I use today.

In so far as exams are concerned, a volunteer would record the questions on a tape for me. I would listen to the questions recorded and type out the answers on a typewriter. It was difficult in the sense that I could never read what I typed. For instance, very early on, one time the typewriter ribbon broke and only after twenty minutes of typing did I realize that there was no paper in the typewriter. It was fixed later and I was able to retype the answers that I missed. This was how I went through law school.

4. From 1982 to the end of 2015, you practiced law in Toronto with the Ontario Ministry of the Attorney General, in the areas of constitutional, civil, administrative and most recently, criminal law. For handling such cases, especially criminal cases, you are often required to deal with material evidence and demeanour of the witness which requires direct visual perception. How did you handle cases that required you to appreciate evidence of this nature? Which of these branches of law did you find most accessible as a blind lawyer?

For the last 23 years of my practice, I spent a majority of my time in criminal appeal and not at the trial level. So, I already had a transcript from the trial level with the details set out and I read from the transcript and argued. I spent about 1-3 years at the trial court level. To understand the demeanour of the witness, I would listen very very carefully to what they were saying and I found that I could understand a lot from just listening very carefully. And whenever I needed to understand the exact expression of the judge or the witness, I would ask my law students/clerks.  In fact, sometimes how a witness looks can be misleading and I had the advantage of listening to them and make my assessment on the way they spoke.

5. In what way did it interfere with your ability to argue seamlessly?

It did not! I argued 200 cases at the appellate level and 30 cases at the Supreme Court and none of this interfered with my argumentation ability.

6. As someone who has been in legal practice for over 3 decades, what significant differences, in your view, has the advent of assistive technology brought about in the way lawyers with disabilities function on an everyday basis?

Technology has made things much easier today. Earlier for long trials, I would need a volunteer to read out the transcript in its entirety. Now, my assistant can send me an MS Word document of the transcript. I can download it from Dropbox, onto my computer and read it. With technology, I can be at different places and still have access to transcripts on my phone.

The advent of email has also made communication so much easier today.

7. In your long and distinguished career, you have appeared as counsel or co-counsel in at least 30 cases before the Canadian Supreme Court. How has appellate advocacy been different for you when compared to trial advocacy as a lawyer with a disability?

The key difference is that, as an appellate advocate, you are merely required to peruse the transcript and frame your arguments on the basis of that. You don’t have to put together a record. I can only speak about appellate level advocacy as I have not focused on trial level advocacy. I enjoyed appellate work in general; now this does not have anything to do with my disability. There could be a lawyer who prefers trial advocacy over appellate advocacy and that is a choice.

As a trial lawyer, you may have to confront a situation when the lawyer on the other side suddenly cross examines a witness and you are caught off-guard. This does not happen with appellate work.

8. You have taught various courses at the faculty of law at the University of Toronto as well as at your alma mater. Can you describe to us some of the strategies that you adopt in order to make this assignment accessible to you with specific reference to two aspects: (a) managing a large body of students effectively; and (b) engaging with the reading material that forms the subject matter of your class discussions?

For the courses I taught at the University in Toronto, I prepared the course work myself. Therefore, the reading material was prepared/compiled by me and was completely accessible. There was no question of inaccessible material as I had prepared it myself. In fact, I once had a student who was blind who took my course. When he approached me for course material, I emailed all the modules, readings and course work to him. He later told me that this was the easiest course he had attended as everything was accessible. I did this for myself because I had to make everything accessible for myself.

Coming to your second part, my classes are very small – usually around 12 in number. Therefore, engaging with students is not really an issue. I ensure that my students sit in the same spots in all my classes and overtime, I become familiar with their names and know everyone in the class.

As far as my alma mater is concerned, I only take guest lectures there, so there is no question of classroom discussions or reading material. In such lectures, it does not matter if the size of the classroom is 50 or 100 or 200.

9. In a class involving a legal subject, one is required to grapple with large volumes of information. Do you remember the same, or adopt any other strategies to refer to the relevant material?

I have a very good memory. I’m generally able to remember large volumes of information. You know, my wife is a psychologist and her area of expertise is studying the human memory and I tease my wife saying that you study memory while I use it to my advantage!

I did not learn Braille as I had limited vision till age 14 and I lost my vision only after. It was at a time when tape recorders were available, thankfully! So, I did not see the need to spend time and energy in learning Braille as I did not find much use for it back then! My proficiency in Braille is limited. I can probably take down ten words or so in Braille on a page. Having said that, if you have the opportunity you should learn Braille today as it can be very useful. Back then, there was very little information available in Braille, so there was no incentive to learn. But today, there is a lot of content available on the refreshable Braille display which is very very useful.

10. However, the price of a refreshable Braille display is exorbitant for a person living in a developing country.

11. In your class, how do you deal with a situation in which you are required to refer to a paragraph verbatim?

In case I need to refer to a paragraph, I simply pull it up on my computer and project it to the class, so then they can read. Or I may direct the class to a particular page number/para number which contains the text.

12. Is referring to large amount of material an anxiety inducing process?

13. You have played a pivotal role in the successful passage of a number of transformative pieces of legislation for the empowerment of persons with disabilities in Canada. Given that it is a widely held belief that a robust law is the least common denominator and the effective integration of the disabled into mainstream institutions is contingent upon a change in mindsets, to what extent, in your view, have these laws been able to transform the lives of Canadians with disabilities?

I don’t care about changing mindsets. Mindsets can come later. But you need the law to change first. The way I look at it is that mindsets can always change later. The crucial aspect is that you have laws that mandate compliance with certain standards. For example, if an elevator in the lift of a hotel has Braille labels, I don’t care about the reasons why the Hotel put it. It would be lovely if mindsets change but we cannot wait until such time and we need laws that mandate compliance today.

14. In 2010, the Canadian Lawyer Magazine recognized you as one of Canada’s 25 most influential lawyers. What has been your biggest motivation in your professional journey and has helped you achieve feats that few lawyers with disabilities have been able to achieve anywhere in the world?

The IDAP interview series aims to solicit actionable insights from lawyers with disabilities on the strategies adopted by them to excel in their field. The series also seeks to educate and increase awareness within the legal fraternity, with the ultimate aim of fostering meaningful dialogue on reasonable accommodation for persons with disabilities. If you have any comments/feedback on our series or if you would like us to interview a lawyer, please reach out to us at info@idialaw.com.

We would like to thank Aine Kelly Costello for connecting us to David Lepofsky.

You can read our other interviews here. 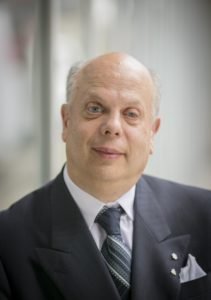