Akhil Nenavath hails from Hyderabad, in the state of Telangana. He has always been academically inclined and received 85.6% in his twelfth standard exams. His father passed away when Akhil was barely 2 years old and his mother is the sole earning member of the family.

It was always his ambition to pursue law in a top law university of the country but was aware that his mother could not afford the high fees of such law schools. His cousin in NALSAR University, Hyderabad connected him with IDIA Hyderabad Chapter and thereafter he was chosen as an IDIA Trainee and subsequently cracked CLAT.

Akhil is very thankful for the opportunity he has received to pursue law in NLUO. Entering a prestigious law school was really a dream come true for Akhil. He also pursued a winter internship in December 2019 at Mamidipudi Venkatarangaya Foundation (NGO) in Hyderabad wherein he got to work on issues pertaining to right to education. Akhil is a part of the NLU Odisha Cricket team and had also represented
his college as a part of the cricket team at the WBNUJS sports fest – “Invicta”. 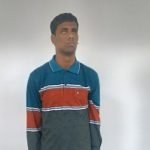