Aravind is a student with visual impairment from Nellore in Andhra Pradesh. Even though he lost his eye-sight early on in his childhood due to an unfortunate accident followed by lack of proper medical care, he never lost his fighting spirit, and wants to bring about social change. He completed his 12th standard under the Andhra Pradesh State Board, securing 91.2 percent in the Commerce stream.

Aravind’s father is a compounder in a hospital, while his mother is a homemaker. He has a younger brother, too. Aravind’s interests include playing cricket and listening to music. He was introduced to the idea of studying law through an IDIA sensitization program conducted at his school.

In his interview with The Times of India, Aravind said:

“When I was in class XII, my life changed as I met IDIA (Increasing Diversity by Increasing Access to Legal Education) representatives who coach Common Law Admission Test aspirants free. IDIA, a pan-India organisation, conducted an entrance test in which I topped. I always thought lawyers are good for nothing. They simply sit under a tree and charge Rs 300-500 per case. But my opinion changed when Shamnad Basheer of IDIA talked to me about the significance of law and a lawyer’s role in molding society.”

Aravind performed brilliantly in the law entrance examinations, securing an All India PWD Rank 10 in CLAT and a PWD Rank 3 in the NLU Odisha entrance examination. Aravind secured admission at the West Bengal National University of Juridical Sciences (NUJS), Kolkata. While he believes that law is a very interesting and challenging field of study, his dream is to become an I.A.S. officer. His role model is Mr. Srinivasulu, a visually challenged I.A.S. officer from his hometown. Aravind wants to become successful not only for himself, but also to be a role model for other visually challenged students like him. He graduated from NUJS, Kolkata in the year 2016. He is currently a Legal Officer at Coal India Limited. 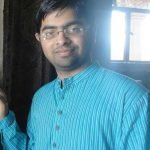