Narala Chenna Reddy is a visually impaired scholar who hails from a family of farmers, from a village in the Ongole District of Andhra Pradesh. His combined family income was a meager Rs. 4000 a month when he was selected as an IDIA Trainee.

However, neither his family’s modest financial condition nor his visual impairment could stop Chenna from making the most of the chance he got to pursue his education. He left his village to study at the Devnar Foundation’s School for the Blind and later, at the Sai Junior College for the Visually Impaired in Hyderabad. He was determined to pursue higher studies. He maintained a good academic record during his schooling. He was always well prepared for his IDIA classes, demonstrating an up-to-date knowledge of the current affairs, an excellent command over English, and a keen ability to understand various legal principles.

Chenna’s dedicated effort finally paid off when he was able to crack CLAT 2012, securing a place at National Law University, Odisha (NLUO). He is an avid chess player. He and Avadhuta Vamshi Krishna represented their university in the chess tournament at Invicta, the sports festival of West Bengal National University of Juridical Sciences, Kolkata. He was semi-finalist in Invicta in 2015, and runner-up in 2016. Chenna and Vamshi were also semi-finalists in the chess tournament at Spiritus 2015, hosted by the National Law School of India University, Bangalore. He also received the Tech Mahindra XRCVC Scholarship by the Xavier’s Resource Centre for the Visually Challenged.

Chenna’s internships include stints at BananaIP Counsels, a law firm in Bangalore and Kant Associates in New Delhi. He also worked under Senior Advocate S.K. Rungta in New Delhi and with the Andhra Pradesh Human Rights Commission. Chenna is actively involved in disability rights’ awareness and has made presentations at NLUO’s Disability Symposium in addition to attending a disability-themed conference at ILS Pune. He graduated in the year 2017. He is currently working as an officer with Punjab and Sind Bank, Vijayawada. 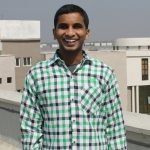