Naveen Prince hails from Teekoy, a village in Kottayam district in Kerala. His father was an auto driver, but had to stop working due to an injury. His mother, who works at a petrol pump, struggles to make ends meet. He also has two siblings. Naveen scored 94.6% in his intermediate exams (commerce stream).

Ever since then, he took matters into his own hands and made many sacrifices, and did whatever it took to prepare for the law entrance exams, all in hopes of pursuing the best legal education he could get. Not only did he have to leave his village and family behind to live alone in a hostel during his preparation for the exams, there were also many days when he intentionally skipped lunch and meals just to save some money for his preparation. Despite having to travel long distances to attend classes, he never let fatigue affect his studies or his charming smile.

In addition to being a great conversationalist, in his free time, Naveen enjoys reading, especially Malayalam literature and short stories. He is also an avid follower of cricket and loves to play it whenever time permits. We hope he fulfills his dream of helping his and other communities that face difficulties. 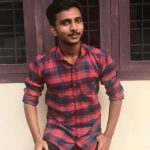