Ragvendra’s father is a taxi driver and his entire family lived on about INR 60,000 per year when he joined us as trainee. At 17, Ragvendra, a resident of Jodhpur, took on the staggering responsibility of running the household while his father was bedridden. His strength and initiative became apparent during this time, when he earned money by conducting tuition classes, alongside continuing his own schooling.

In Ragvendra’s own words, “trouble, struggle, sacrifices, disappointment, and rejection have become a part of my everyday life; however, I have learnt to deal with them. My journey hasn’t been easy and I am aware it won’t get easier, but giving up is not something I do. There were many who doubted me and my capabilities, I’m least bothered about them. All I want to say is celebrate the life you have and trust yourself to reach places.”

Ragvendra completed his schooling at Kendriya Vidyalaya No. 1 (Army), Johpur, and was trained by the IDIA Rajasthan Chapter. His academic performance through school and now college has been consistently good.
Ragvendra has been passionate about studying law since he was in Class XI. He performed exceedingly well in CLAT and secured admission at Gujarat National Law University. He has interned at Vidhi Centre For Legal Policy, Office of Adv. Madhav Khurana and People’s Union for Civil Liberties (PUCL), Jaipur among other places. He has also been the Founder Member, Gender and Sexuality Forum, GNLU. He has also been a part of the Legal Service Committee and IDIA Gujarat Chapter. He has volunteered with two organisations that work towards transgender rights: Lakshya Trust and Vikalp Foundation.

Ragvendra is an enthusiastic, hard-working student who is passionate about social justice. In addition to law, Ragvendra is an avid reader with a keen interest in literature, especially Urdu poetry. He also maintains his passion in music, and has performed on various occasions within college. 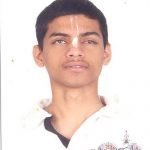