Rishiraj, a cheerful young man who can brighten your day with his positive energy, hails from the Banka district of Bihar, which is one of the most underdeveloped districts of the state when it comes to educational infrastructure. He completed his 10th standard from Simaria with a CGPA of 10 out of 10 and 12th standard from Tarapur with a score of about 76.6%. He has an elder brother who is preparing for government services after his graduation. His father is the sole bread earner of the family. His father works as a medical representative, earning around Rs. 20,000 monthly for a family of four.

Rishiraj’s inclination towards the field of law came at an early age of 15 when he interacted with an alumni of National Law University, Jodhpur. At that moment he realised that law requires every skill that he is interested in and that he aspires to learn and use, such as – reading, writing, and debating. Later, he researched various opportunities on the internet for scholarships and came to know about IDIA. He reached out to our Bihar Chapter and was inducted as a Trainee by them. He describes law as the wheels of a vehicle. He says – “If any of the wheels are removed or mishandled then the whole vehicle would collapse. So, law for me is those wheels of society which leads it to run smoothly. Once I get to know more about the field after joining it, I would work to empower the people and community as I come from an underprivileged community which suffers. I will be familiar with the issues involved and problems faced by them, therefore, I can address them efficiently. To the society in large, I will work to enlighten people about the powers they have and also about the wrongs that need to be extirpated.”

Rishiraj says that law has turned him into an ambitious person with an aim of providing justice and eliminating the social oppression taking place in society. He wants to be inducted in the justice delivery mechanism. Rishiraj feels financially restrained as he never had the resources to afford proper education. He calls his struggle a blessing, which has taught him to have a positive outlook and become an ambitious person. The lack of privilege is something, which he believes taught him to respect things more than others and not to take things for granted. He is of the firm belief that education is the only tool to change the future.

Apart from studies, Rishiraj plays badminton and cricket. He was the school cricket team captain and led his school to win many accolades. 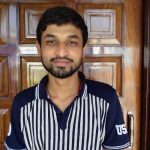