Thangminlal Haokip, or Lalcha as we call him, hails from the village of L. Gamnom in Manipur. His father, Lhunthang Haokip runs a small general store in the village. At the tender age of eight, Lalcha came to Bangalore to stay in a home for Manipuri children (Hope Lion’s home). After studying in multiple schools in Bangalore, Lalcha completed high school from a school run by the non-profit organization Parikrama Humanity Foundation in Bangalore. Lalcha has always been interested in politics and social service and thinks that study of law is the best platform to pursue both. He heard about IDIA from a teacher at Parikrama and immediately approached us.

Extremely dedicated and hardworking, Lalcha has not just managed to crack the Common Law Admissions Test (CLAT), but secured admission at the prestigious National Law School of India University, Bangalore. He has a very bright future ahead of him. 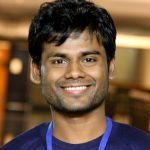