Yamuna Menon is a B.A. LL.B (Hons.) student currently studying at the National Law School of India University, Bangalore. She secured the 28th rank in CLAT 2015. Yamuna found out about IDIA when she came across an article in the newspaper and got in touch with the IDIA Kerala Chapter. She is an all-rounder who is engaged in academics, art and sports events. She was always active in co-curricular activities in school and continues the same spirit in college as well.

She has participated in debates, Model United Nations, and various other activities. She has worked with various social institutions, including NGOs, which helped her in developing qualities to face the real world outside and learn from the challenges that she is presented with. She has been editor-in-chief of Indian Journal of International Economic Law. Her article on the exploitative Sumangali scheme in Tamil Nadu textile industry for which she had one-to-one interaction with Sumangali girls in villages near Coimbatore has been published in the Cambridge Law Review.

She has also been a Judicial Intern at Office of Hon’ble Dr. Justice D.Y. Chandrachud, Supreme Court of India. Her internships include those at Shardul Amarchand Mangaldas & Co, Hindustan Unilever and Economic Laws Practice.

She was motivated by a Senior Advocate in the Supreme Court of India to consider law as a career option. Currently, she is the topper of her batch, with several of her research papers and essays receiving the highest marks in courses. As of now, she has plans to do a Masters in a college abroad in the future, which will help her to eventually become an academic. 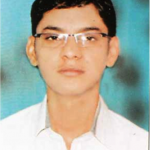