Sujith is a member of the 2018 batch of the National University of Advanced Legal Studies (NUALS), Kochi. He is currently working with Axis Bank (Legal).

Sujith hails from a family with limited financial means in Tripunithura, Kochi. His father was an auto rickshaw driver and his mother is a homemaker. He attended Prabhath Public School till the 10th grade and then attended Sree Narayana Vidyapeetam Public School from where he graduated high school. He began working in catering at the age of 14 and when he was 15, he visited the High Court once as a part of his work. He was fascinated by how the entry of judges silenced a noisy hall full of lawyers and this got him interested in law. He has had to work part-time in catering and event-management to support his family and fund his education.

A couple of IDIA volunteers once hired his uncle’s cab and that changed Sujith’s life forever. His uncle, who spoke to the volunteers and enquired about law as a career and the law school they went to, recommended his name to the volunteers. The erstwhile team leader of the IDIA Kerala Chapter, Raghul Sudheesh, introduced Sujith to IDIA. Sujith then took the Common Law Admission Test in 2013 for which he had prepared with limited resources and managed to secure a seat at NUALS, Kochi. He entered law school, ready to face anything that came his way.

Since he lived in the city, he chose to commute to law school every day. His prior experience in catering and event-management helped him assist in the organization of numerous events in NUALS. He has chaired the Accommodation, Food and Stage Committees of numerous seminars and competitions organized by NUALS.

A beneficiary of an act of kindness himself, Sujith has been a volunteer with an Orphanage Trust in Kerala and has helped organize, and has instructed on legal aptitude and current affairs, at their Annual Free Coaching Course for LLB Entrance Examinations from 2014 onwards. Through this engagement, he has helped around 30 students study law at various colleges in Kerala. In his penultimate year in law school, he served as the Secretary of the Arts Club of NUALS. In his final year of law school, only a couple of months before he took his final examinations, he lost his father untimely in an accident, who would have surely been happy to see his son graduate from law school. Interested in litigation, he started assisting a trial lawyer in Kochi immediately after his final examinations at NUALS.

For him, IDIA has not only helped him gain admission to a law school, but has also supported him throughout law school by providing him with mentors and helping him procure internships. 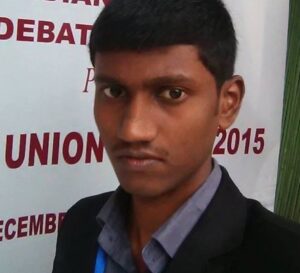