On 16 August 2021, we set out on a brief visit to Wayanad as representatives of IDIA for a lunch hosted Mr. Rahul Gandhi, Member of Parliament from Wayanad, Kerala for the tribal students from the district who cleared CLAT with the assistance of IDIA. Little did we imagine the depth of what was in store for us. Not only did we meet Mr. Rahul Gandhi, but we also got an opportunity to trek through the forests of Wayanad to meet the families of two of our IDIA Scholars – Mridula and Radhika. Further, we met and interacted with officials working on the ground with the tribes. Needless to say, it was a journey that gave us new insights about the importance of diversity and respecting different cultures. 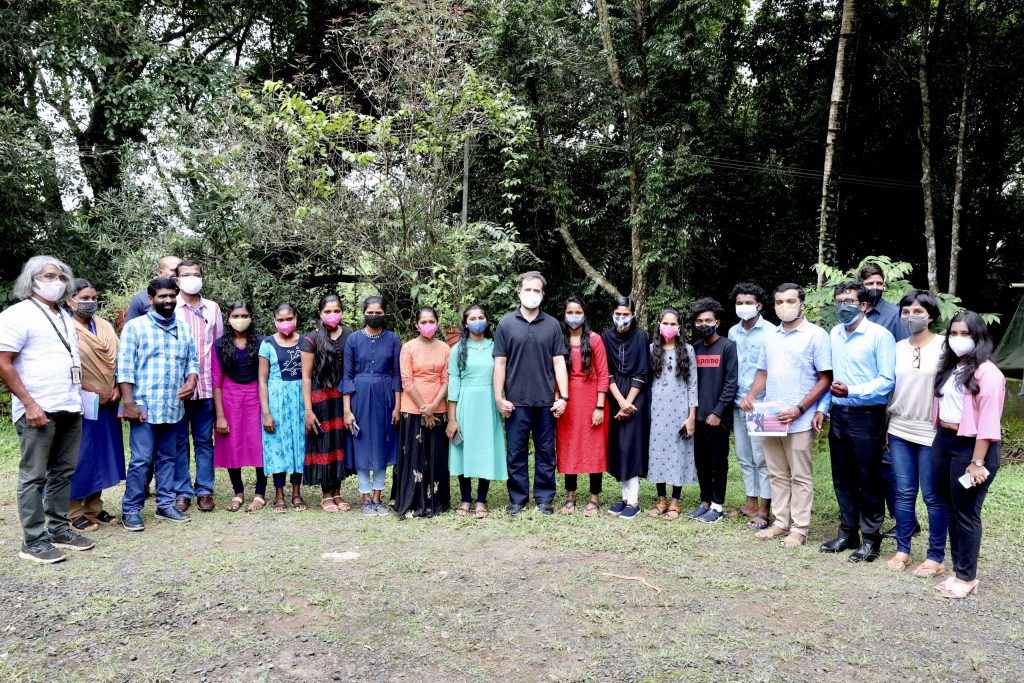 The tribal students who cleared CLAT belong to a particularly vulnerable tribal group called ‘Kattunayakan’, who primarily survive on the production, sale and collection of forest produce. IDIA had sown the seeds and explored the possible avenues for a potential collaboration with the community in 2020. Now, here we were, witness to the results of an year of hard work and collaboration in the form of Radhika, who cleared CLAT in 2020 and Mridula, who cleared it in 2021. Both of them have made it to the National University of Advanced Legal Studies, Kochi. They are the first individuals from their tribe to pursue legal education and hope to make a difference within their community using law as a tool of social reform.

The District Legal Service Authority, Wayanad, our main partner in the training programme of tribal students, graciously hosted us at one of their facilities. We arrived at the lush green hilly district in northern Kerala on a cold evening and were greeted with classic Keralite comfort food combo comprising of hot kanji (rice gruel), cherupayar thoran (green gram sabzi), chammanthi (chutney), pappadam (pappad) and omelettes. The delightful meal was prepared by Mr. Santhosh, a cook at the Govt. Model residential school, Kaniyambetta, where we were lodged and shown great hospitality. He radiated refreshing enthusiasm as he described the kitchen facilities and the menu for the school’s students. It was a pleasant surprise to note that, unlike most such institutions, the government school projected a fair degree of sophistication and class when it came to its classrooms, kitchen facilities and boarding. Over dinner, we were joined by Mr. K.C. Cheriyan, Project Officer, Integrated Tribal Development Project, Wayanad. Through a long conversation, he walked us through the many issues that they faced while supporting the tribal students in chasing their ambitions in law and, generally, the problems faced by the tribes.

Mr. Cheriyan prefaced his conversation by describing how the tribe lives smack in the middle of the forest and yet rarely have man-animal conflicts due to the perfect sync and harmony they’ve achieved with nature. He talked in length about the Recognition of Forest Rights Act, 2006 that recognizes the rights of the forest-dwelling tribal communities and other traditional forest dwellers to forest resources. He informed us about the many cases of siphoning of funds, which were a constant with the government schemes allotted for the benefit of the tribes. He didn’t mince words when it came to calling out intra departmental corruption. With particular reference to a central and state government-funded scheme from 2008, he narrated how huge sums were alleged to be appropriated by appointed nodal officers which went unnoticed for years. On an interesting yet unsurprising tangent, he pointed out how many officials are lukewarm in supporting the development of tribes simply because they do not want them to be aware of their rights and be empowered. Upon clearing CLAT, candidates are expected to turn in ₹50,000 in order to block their seats. Arbitrary as it is, we learnt how it is a bigger disadvantage to communities like theirs. The families could possibly never turn in such a massive sum at such notice. Mr. Cheriyan also narrated how difficult it was for his department to secure the amounts for 9 children, who cleared the exam, from the government exchequer via beneficial schemes for the tribe.

Radhika and Mridula are representatives of a tribe that has in the past been hoodwinked into signing away their rights on pieces of paper on many occasions by government officials and resort owners for whom the forest is a hotshot destination. He added that once an educated member of the community, and that too a lawyer, aware of their rights, comes into the picture, there is going to be a dynamic shift. Radhika and Mridula, the first of many more to come, are nothing but a revolution in that sense. 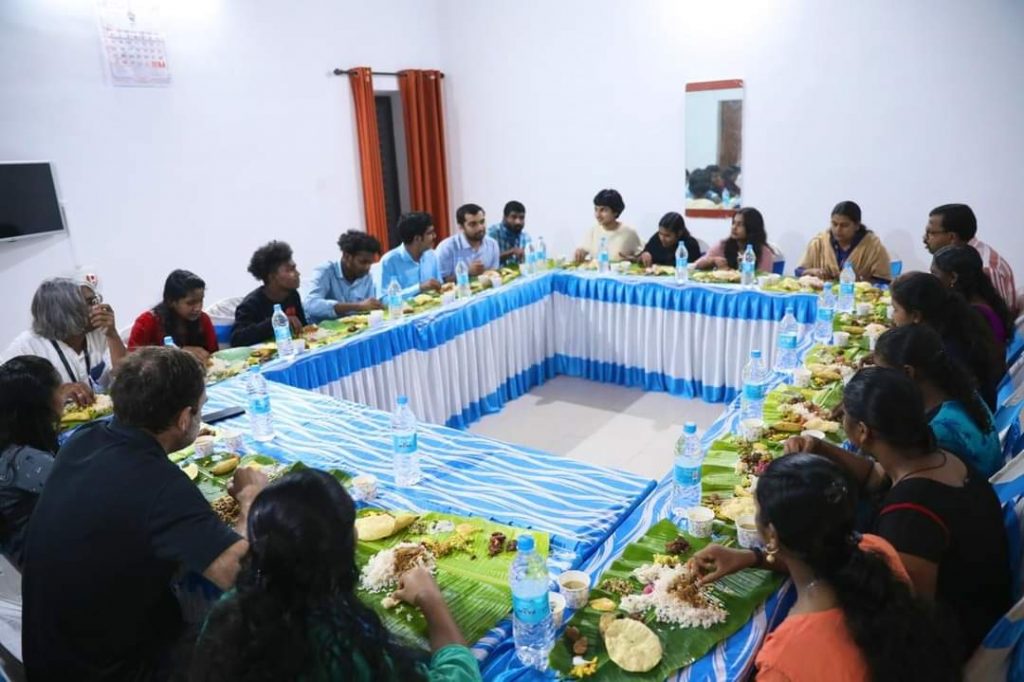 Our contingent, along with IDIA trainees and their teachers, had a traditional Keralite Sadhya with Mr. Rahul Gandhi on the 16th of August. Mr. Gandhi was curious to learn about the tribe and IDIA’s work in aiding them. We explained the many specialties of the tribe including, how they had their indigenous language within the community, how they depended largely on forest produce et al. He urged each student to speak and went out of his way to make them comfortable in discourse by asking them about their pets and hobbies. After paying close attention to it all, Mr. Gandhi asked the students what privilege meant to each of them. One of the students wasted no time before replying with ‘honour’. After listening to a few more answers he said, to him, privilege was being part of a tribe with such a great tradition and ancestry. He stressed how they are representatives of a tribe that has its own unique stories and culture which is something he will never be able to possess. He also added that while he believed they had a distinct privilege – that of being part of the tribe, he also acknowledged that society does not favourably acknowledge that privilege.

While wrapping up the conversation that lasted over an hour, he asked the students if it was okay to advise them and proceeded to tell them how asking questions is the process by which information is attained and urged them to always ask questions. He told them how their process of attaining information has reached a certain stage, i.e. cracking CLAT, because they were willing to start somewhere by asking questions about CLAT and law. Drawing a beautiful analogy to shining a torch at night that helps you see a certain distance ahead, he explained how asking questions were similar. He urged the students to always ask questions going forward and described how the process of attaining information comes to a stop when you stop asking questions. Mr. Gandhi perhaps epitomised his advice and was reflecting the trait throughout his interaction with us. To illustrate, while narrating a conversation we had with Radhika about Mooting, he wanted to know all about Moot courts as a law school activity. A particularly endearing segment was when the students sang a folk song in their indigenous language. Rest assured, the students were thoroughly inspired and immensely proud to meet their legislator with whom they had a memorable lunch. 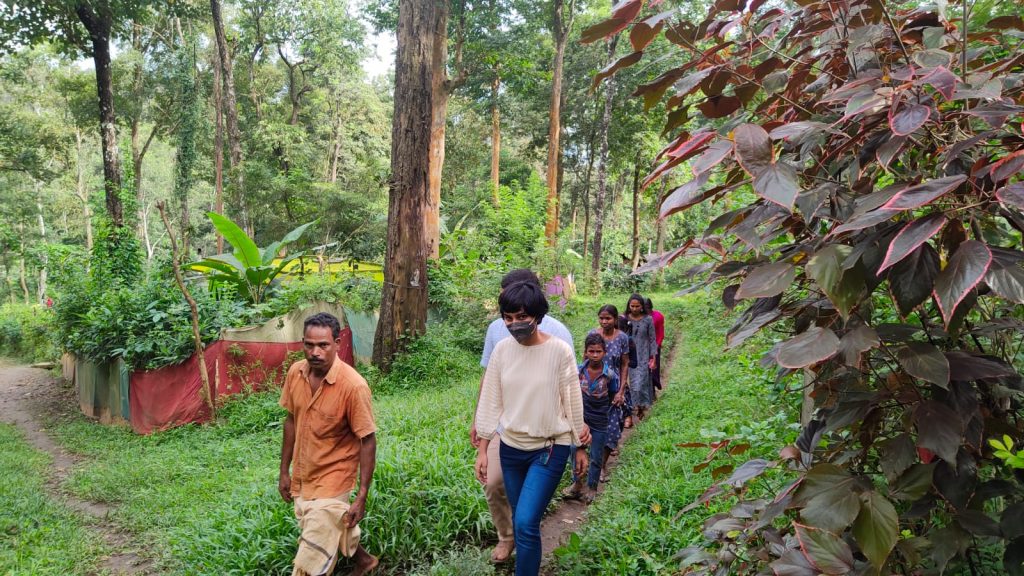 After our lunch with Mr. Gandhi, the final deed on our agenda was a visit to Radhika’s and Mridula’s homes. We travelled along winding and beautiful paths enwreathed with sturdy and giant trees. To reach Mridula’s place we trekked on foot up a narrow, unpaved and steep path for the last mile. Her house and surroundings are oft-visited by tuskers, rogue and otherwise. Her mother narrated the ordeals they’ve to undergo thanks to the impassable passage leading to their house. We were astounded to hear that she carries, among other provisions, LPG cylinders atop her thin frame while trekking the path that left us panting on our way up. Even more unsettling was the fact that to get their provisions from the ration shop, each family in the neighbourhood pays ₹300 for a jeep that would take them to the shop thanks to how far it is. We asked her what happens when they cannot get all the provisions on the trip and she smiled and said, we starve. She then pointed to the forest packed with coffee shrubs and areca palms, to indicate how they could always count on wild produce. The family showed us fissures in the house that were caused by trampling elephants and explained that the bottles on a wire that greeted us at the entrance were a means to alarm them in case of approaching elephants so they could light a fire and try to scare them away. When all fails, they resort to forest officials to distract the animals. It was eye-opening to also learn how they don’t even have proper documents as to ownership of property and live knowing that eviction can seek them anytime. We experienced very patchy connectivity and range while in the forest and were curious to see how the kids in the region attended virtual classrooms. They said that their main resort was a community centre that was located at a short distance away  that experienced better connectivity. The community had easy access to the centre, and it is a popular place of gathering. The family was particular that we made our way back before dusk lest we had any stray encounters with the wild.

Next up, we set out to visit Radhika’s place. Like Mridula, Radhika lived in the interior parts of the forest. Her family is in the midst of constructing a new house and they narrated how extremely difficult it is to get building supplies in, due to the trenches that fenced the area to keep wild animals away. They’ve to physically fill the trenches to allow for vehicular passage and thereafter empty them too. We trekked further into the forest where Radhika showed us the beautiful catchment area where Elephants come to drink water. While bonding over a glass of tea, the family filled us in on little details about living in the forest. An elder of the family was sitting near burning logwood and we asked them why the wood was set on fire. We learnt that it was to keep tigers off their cattle. They sleep around the fire at night to watch over their flock and they narrated to us about how in the past dogs and other animals have been taken away. The fields nearby were also fenced with electric fences that would come alive in the night. While walking about we noticed how the members of the tribe were thoroughly engrossed in their activities and did not wish to mingle with us, yet the respective family members of Radhika and Mridula mingled naturally with us and were very welcoming.

While we made our way back to our accommodation, we discussed the events of the day and couldn’t help marvel at how different our lives are. Our struggles and stories are so starkly separate, yet it adds up to each of our persons, making us the beautiful individuals that we all are. What is important though is to accept this fact and be respectful and sensitive to our differences in all walks of our lives. We learnt so much over our brief visit, and we appreciated, even more, the work of the organisation we were part of. 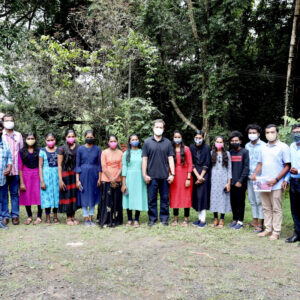