Nature is the perfect depiction of diversity. With the desire to spread the message of diversity and inclusiveness in legal education, three days after organizing a Mini Marathon with the theme “Run so that someone could learn” on 2nd June, 2019 (read about it here), the IDIA Sikkim Chapter decided to celebrate the World Environment Day on 05th June, 2019. The team decided to do so by putting up a plant stall in Gangtok as an awareness event regarding environment conservation, as well as to spread the word about IDIA. 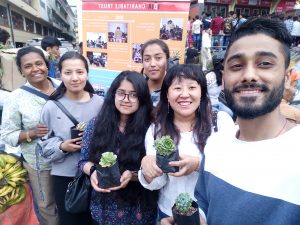 The team had to put in extraordinary efforts. The planning for setting up the plant stall started soon after the marathon was concluded. The team narrowed down succulents as the plants to be sold in the stall. The team had planned to set up the stall at M.G. Marg but due to prior reservation for other events, the permission for the same wasn’t granted. However, the Ward Councilor of Lower M.G. Marg was kind enough to grant permission for putting up the stall in the Market Area, as the same fell within the ambit of her jurisdiction. The succulents (55 in number) were bought from Mr. Prajwal, who has his own nursery in Ravangla. He was kind enough to personally bring the plants to Gangtok for the stall a day before the event.

With much enthusiasm on 5th June, 2019 the team put up a stall adjacent to the Shopping Complex at 11:30 am and started selling the plants at a reasonable price. The team members proactively informed all visitors to the stall about IDIA and the work done by IDIA. The task of selling plants in the scorching hot June weather and getting customers was proving to be a daunting task. Luckily, a generous lady who was selling fruits in the complex adjacent to the stall, upon learning about IDIA, decided to help the team by asking her own customers to visit the plant stall. While a few such customers bought succulents, others appreciated the work done by IDIA upon learning about the organization. The team wrapped up the stall at about 6 p.m. 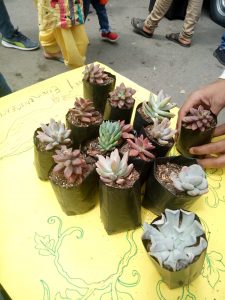 This event has indeed been one of the great achievements of the IDIA Sikkim Chapter as it served a dual purpose of expanding the outreach of IDIA and celebrating World Environment Day. It also further strengthened the bond between the team members. The event was successful due to the collective efforts and synchronization of all team members.

The IDIA Sikkim Chapter is looking forward to organizing more such events in the near future for spreading the message of diversity and inclusiveness in legal education.