The IDIA Jharkhand Chapter which operates out of National University of Study and Research in Law, Ranchi conducted mass sensitisation sessions in Latehar. Latehar is a remote district in Jharkhand, which is located about 120 kms away from their college campus in Ranchi. This district, like many others in India, faces high illiteracy rate and many social issues including women trafficking, witch hunting and rampant child labour. The sensitisation team comprised of Afsar Raza (Team Leader, IDIA Jharkhand Chapter) along with Quasain Raza Akram and Tarique Mumtaz (Members of the Chapter).

The team travelled all the way from Ranchi to Latehar to conduct these sessions. The team was in constant touch with Mr. Abu Imran (I.A.S.), the District Collector at Latehar, who provided all possible assistance like making arrangements for food and accommodation at the Circuit House, Latehar (District Guest House) for the IDIA team. He arranged permission to conduct sensitisation sessions in the Collectorate Office, Latehar and in some government schools in Latehar. Without Mr. Abu’s interest and cooperation, it would have been tremendously difficult to obtain permission for the sessions in these tough times because of the ongoing pandemic.

The first of these sensitisation sessions were successfully conducted at the Collectorate Office, B.H.S. +2 High School and Rajkiya +2 High School Nawagarh, Latehar.

During the sensitisation session at the Collectorate Office, the IDIA team along with Advocate Yogendra Yadav (former IDIA Scholar) addressed more than 100 selected students in the presence of Mr. Abu Imran, DC, District Education Officer, DMO and the Principals and Teachers of several government and private schools of Latehar. During the sensitisation session at B.H.S +2 High School, Latehar more than 250 students were present and at Rajkiya +2 High School Nawagarh (situated in a very remote area which is more than 15 kilometers away from Latehar) more than 100 students were present. In total, approximately 500 students were sensitised by the team of IDIA Jharkhand Chapter in the Latehar drive.

All the sensitisation sessions were conducted by following COVID safety guidelines. Since, the students were from Hindi medium schools, the sessions were conducted in Hindi to enable the students to benefit from them. As the students were insecure about not being fluent in English, they were motivated to not look at lack of proficiency in the language as an unsurmountable barrier but as a challenge as, like any other language, English can be learnt with consistent practice and proper training. The students were encouraged to not get disheartened by the lack of resources but to utilize whatever they have at hand. They were informed about organisations like IDIA that are present to help them as much as possible.

Advocate Yogendra Yadav, IDIA Alumni, shared his personal story- about his struggles. He could not attend regular school after second standard but overcame this and many other challenges to become an IDIA scholar, which transformed his life. He spoke about his gratitude to Late Professor Shamnad Basheer, founder of IDIA, for his extra ordinary efforts in shaping the future of so many students from the marginalised communities.

The teachers and students were also sensitised about Common Law Admission Test (CLAT) in detail including eligibility for CLAT, its syllabus, its question pattern. The opportunities at law school after qualifying CLAT and the diverse career options after completing law were also discussed. The stereotype that lawyers are “liars” and only practice at courts was challenged by informing them about numerous career options like a career in the judiciary, becoming a law professor, joining the Civil Services, jobs at law firms, opportunities in the corporate sector, work in an NGO and in the Government sector amongst many others. The students and teachers were then convinced that law as a career is as lucrative as any other career.

The team talked about how knowing and understanding law can also help in every walk of life. The team discussed the role of IDIA by citing multiple achievements of IDIA on pan India level, sharing some of its scholar stories, and its contribution in the legal sector by bringing diversity in law schools. They informed the students that they can benefit from IDIA and shape their future and become community leaders by getting the right tools to solve social problems.

The main takeaway for the team from the sensitisations was that- most of the students as well as teachers were not aware of law as a career option. They were only aware of professions like engineering, medicine and management.

Mr. Abu Imran, DC, Latehar felicitated the IDIA Jharkhand Chapter and Advocate Yogendra Yadav with mementos from the Jharkhand Government, appreciating the efforts being made by IDIA to reach out to the underprivileged students and empower them through legal education. He stated that the district administration, Latehar will provide all possible assistance to the initiative of IDIA Jharkhand Chapter and no stone will be left untouched to get this initiative rolling in Latehar. The Principals of both the schools penned down letters of appreciation for IDIA.

These sensitisation sessions were covered by the media as well – by news channels like Zee Bihar Jharkhand, News 18 etc. and by newspapers such as Prabhat Khabar and Hindustan. It is only through media coverage that the students, parents and teachers will get to know about IDIA and law as a career option just like IDIA Alumni Yogendra Yadav who was a newspaper delivery boy and got to know about IDIA through a newspaper. The icing on the cake was that the DC also tweeted from his official twitter handle about the successful conduction of sensitisation sessions in Latehar.

The IDIA National Aptitude Test is yet to be conducted at these 3 sensitised centers. However, the IDIA Jharkhand Chapter is confident that they will be able to onboard some great trainees and prepare them well for CLAT 2022! 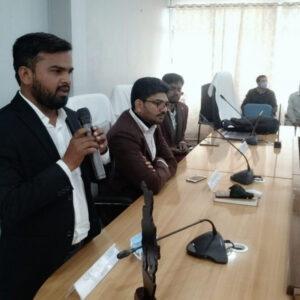