IDIA Punjab Chapter Fundraiser | A First for the Chapter 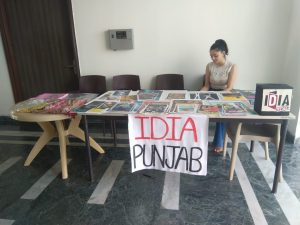 The IDIA Punjab Chapter conducted their maiden fundraising event between the dates of 4th October to 6th October 2019. The event was a culmination of multiple stages of brainstorming sessions, planning and rigorous execution which the team underwent for a period of four months. The first major decision was to ascertain what to sell, exactly what holds public appeal and is a cost-effective commodity that can be sold for such an event. After weighing many ideas and options the team zeroed in on posters for the modern generation and traditional Punjabi handicraft namely ‘Phulkaris’ for a traditional touch so as to cater to people of different age groups attending the event.

With the broad plan on paper, the team set out to execute the idea to perfection and work hard to achieve the desired outcome. The foremost concern thereafter was as to how the team could ensure that the event receives maximum attention and foot fall. After much deliberation, the event was decided to be conducted parallelly with the parliamentary debate conducted by Rajiv Gandhi National University of Law, Punjab, namely ‘Agahi’, which would mean the presence of people from other colleges and universities on the campus thereby implying better opportunities for sale. Apart from strategizing and planning the logistics of the event, a considerable amount of time was spent on the compilation of an amazing collection of posters by our very own talented and nerdy team.

On the dates of the event, a ‘Donation Box’ was also placed at the stall for the visitors to make a contribution towards the cause envisioned by IDIA, i.e. helping children from marginalised communities get a legal education in the premier law universities in the country.  The stall was manned by the volunteers from the team who used their best marketing skills to impress the people visiting the stall.

The foot fall was not just limited to the university students and debate participants but also included faculty members who showed their whole-hearted support for the event and made generous contributions.

After the successful execution of the first fundraiser, the team intends to conduct such events frequently and improve upon the arenas which lagged, for learning from the mistakes made is the best way of avoiding them in the future. The money raised from the event will be used for promoting legal education among marginalised communities in Punjab, including for conducting sensitisation sessions and buying training materials for IDIA trainees from Punjab.

Keeping the whole economic arena of demand and supply aside, the fundraiser indeed has been a real boost for the morale of the chapter as the profits and the successful execution of it have strengthened the resolve of the members, as a team, in the idea behind IDIA and also acted as motivation to work harder towards the future of the young lives we influence.

The author of this piece is Nyamat Sekhon who is a third-year law student at Rajiv Gandhi National University of Law, Punjab and has been associated with IDIA’s Punjab Chapter since 2017. She has a keen interest in child and women’s rights and has successfully mediated family disputes in furtherance of the Legal Aid programme of RGNUL.