The Legal Services Vertical of IDIA – UP Chapter conducted a legal awareness session in collaboration with the Sadbhavna Trust, Lucknow. The session included spreading awareness on topics like the laws on domestic violence, process of filing an FIR, various welfare government schemes, and legal aid.

About the Legal Services Vertical of IDIA – UP Chapter

The Legal Services Vertical of IDIA – UP Chapter aims to reach out to various socially and economically marginalised communities across Uttar Pradesh. These communities lack access to legal aid, awareness, and support. The primary objective of the vertical is to impart basic legal knowledge and awareness to these communities, making them aware of their constitutionally guaranteed rights, while offering legal support.

Organising the Session with Sabhavna Trust

The ongoing pandemic and the restrictions imposed due to it, made the conducting of awareness sessions a difficult task. However, this hasn’t hindered the relentless spirit of IDIA members who are currently studying at Dr. Ram Manohar Lohiya National Law University. They organized this successful legal awareness session in collaboration with the Sadbhavna Trust, Lucknow, in an online format on the zoom platform.

To prepare for the session, the IDIA members contacted the trust and inquired about the topics on which the organization wanted the session conducted on. After brainstorming for hours, the topics were finally decided, and the members began preparation. The members of the vertical prepared a draft of the content for the session. They rehearsed it multiple times to ensure a smooth session on the final day.

Topics Covered in the Session

The session started with Anushka Verma, a 2nd-year student at Dr. Ram Manohar Lohiya National Law University and a member of IDIA, introducing the aim of IDIA and its various activities to the participants. She eloquently explained to the audience that IDIA seeks to empower underprivileged youth by giving them access to quality legal education. It was founded in 2010 by Late Prof. (Dr.) Shamnad Basheer. She also informed the audience about the multitude of programmes conducted by IDIA and that IDIA is not only a bridge to help its Trainees reach law schools, but it also walks hand in hand with its Scholars on their academic journey and lessens the financial burden for these talented students by providing them scholarships.

Subhi Pastor introduced the first subject which was the Domestic Violence Act, 2005 (the Act). She spoke about women not being able to speak up about violence against them because they are not aware that these laws exist. She explained the relevant legal provisions and informed the participants about their benefits. According to the act, an “aggrieved person” is any woman who is, or has been, in a domestic relationship with the respondent and who alleges to have been subjected to any act of domestic violence by the respondent. Therefore, any person who is or has been in a domestic relationship is entitled to make a complaint invoking provisions of the Act. A “domestic relationship” means a relationship between two people living in a shared household. Domestic relationship can be through marriage (such as wives, daughters-in-law, sisters-in-law, widows); or blood relationships (such as mothers, sisters, or daughters); and other domestic relationships including the ones that may arise through acts like adoption, live-in relationships, and women in a bigamous relationship or victims of legally invalid marriages. Thus, anyone can complain at the police station when they witness such a heinous act happening. She also informed the audience about the various sections of the Act that can help someone in need. A participant inquired about how IDIA would spread the same information to other girls and women in need. Subhi answered that the IDIA Legal Services Vertical will continue spreading such information at every available opportunity. She urged the participants to further spread the learnings of this session.

Next, Kartikay Agarwal explained the process of filing an FIR to the participants. He explained that anyone can go to a police station to file an FIR and elaborated on the steps for filing it. An FIR, also known as the First Information Report, is the first document of a case, which is filed at a police station. Anyone can file an FIR report if they witness any crime. Earlier, one could only file an FIR at the place of residence, however, those rules have been changed. Nowadays, anyone can file an FIR at the nearest police station from the scene of the crime. Kartikay also suggested the participants look through the reports before signing them, in case of any discrepancies that may have been included by the police officer in charge. He advised the participants to approach the superintendents or even the magistrates of their area if a police officer is not ready to file an FIR.

Righved enlightened the participants about various government schemes that are available for the public (especially, for the girl child in various households). Some of the schemes he mentioned were the Pradhan Mantri Matru Vandana Yojana (PMMVY), the Rajiv Gandhi Scheme for Empowerment of Adolescent Girls, and the SWADHAR Grih Yojana. He explained all the schemes and the steps needed for filing of applications under them.

Conclusion of the Session

After this, the host asked the participants whether they had any doubts or queries regarding the session. The audience interacted and asked their doubts. Kartikay, Shubhi, Anushka, and Righved diligently solved every doubt and advised many to visit the District Legal Services Authority, Lucknow, or the Legal Aid Clinic situated at Dr. Ram Manohar Lohiya National Law University for further aid.

Lastly, the members of the Legal Services Vertical extended a vote of thanks to the Sadbhavna Trust for their collaboration, following which the session came to an end. Overall, it was a tremendous success, and the legal services vertical hopes to have many more successful sessions like this! 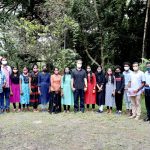 A transformative expedition and a visit to meet Mr. Rahul Gandhi – Radhika, Mridula and other storiesBlog