The UN Convention on the Rights of Persons with Disabilities was ratified by India on October 1, 2007. Under the Convention, the states are obligated to create an enabling, inclusive and accessible environment for all persons with disabilities in order for them to develop their capabilities, be self-reliant, and to lead a life of dignity. India enacted the Rights of Persons with Disabilities Act, 2016 in order to give effect to the principles stated in the Convention, and under this Act, among other things, educational institutions are mandated to reserve seats for persons with benchmark disabilities, and provide adequate support system for their education and employment.

IDIA Odisha Chapter has been working tirelessly to create a diverse and inclusive environment in the National Law University, Odisha. The team is working on a range of issues on and off campus, to in pursuit of its aspirations.

NLUO, like all other educational institutions, has had students with disabilities who have been bright and skilled but have not had a proper, enabling environment to enhance their capabilities and grow holistically. Initially, the University provided basic equipment to the visually impaired students- like special recorders for recording lectures and JAWS software to enable them to use their laptops. However, that was not enough to ensure active participation of students with disabilities in the various academic, co-curricular and extra-curricular activities in the University.

In 2015, there were four visually impaired students in the University. Oftentimes, when their laptops malfunctioned, they were left devoid of access to study material and other essentials. IDIA Odisha Team met with the Vice Chancellor and the Registrar of NLUO, and requested that students with disabilities be provided a permanent room in the hostel with a computer system installed with all necessary software like JAWS, Ducksberry etc. for the students to use in case their personal computers malfunctioned or in any other emergency. It took some time for the University to make such an arrangement, but with consistent follow-ups by the IDIA Odisha Team, the work was finally done

This is not the end of the story- the Accessibility Centre was yet to be born! The team, having realised the importance of a permanent facility in the Hostel, wanted to go a step further in making the University’s academic environment more inclusive and accessible. The team realised that there were many books and other materials that the students required in accessible formats that could not be found online. For this, a specialised device known as Pearl Camera was required to scan any book or document and convert it into a readable format. The team petitioned the Vice Chancellor to make available a Pearl Camera in addition to the existing systems so that all kinds of books and papers could be accessed by the visually impaired students. After nearly six months of efforts, the university accepted the team’s requests and the Pearl Camera was added to this Centre.

Most of the visually impaired students who pursue higher studies are familiar with Braille language, which they are taught in their initial years. Making a transition from Braille to JAWS at NLUO thus becomes a challenge for the students. The team realised this, and requested that a Braille printer be bought for printing important bare acts and other texts- so that the new students who come to the University can familiarise themselves with the University’s academic requirements using methods with which they were previously familiar and comfortable. A few months back, the Braille printer was installed in the Accessibility Centre, and we can now print bare acts in a format that is easily accessible to new and incoming students with visual impairments.

Once the Team was able to arrange all these equipments and software in a permanent room in the Hostel, it seemed reasonable to inaugurate this Accessibility Centre and make more additions to it with time!

The lab was inaugurated by the NLUO Vice Chancellor Dr. Srikrishna Deva Rao and IDIA Scholar Saikh Jiyarul Hoque. The inauguration was also attended by Prof. Dr. Sheela Rai, Mr. Kapil Sharma and IDIA P-PIL fellow Abhay Jain, an alumnus of NLUO and a former member of the IDIA Odisha team. The Vice-Chancellor commended the efforts of the IDIA project towards achieving inclusivity and making law schools more accessible for persons with disabilities. The occasion is significant not just for NLUO and IDIA, but also for the student community in general. It is important that we create inclusive spaces for persons with disabilities. As senior advocate SK Rungta has said: The main apprehension that the society had against disabled lawyers stemmed from their inability to read. However, technology can be a great equaliser. The cost of creating such inclusive spaces is also not so high to act as a barrier for institutions.

At present, the lab is equipped with modern equipment like Pearl Camera (used for scanning books and converting them into e-format), Braille Printer, necessary software like Ducksberry, Openbook reader and other supporting software and all this has been made possible by the valuable support of our Vice Chancellor, Dr Srikrishna Deva Rao. The room was decorated by the IDIA-Odisha team with Braille posters carrying motivational quotes, and a manual guide in Braille for using the equipment and software. This initiative was well appreciated by our visually impaired IDIA-scholar Saikh Jiyarul Hoque. The chapter, in the near future, intends to print the required books, class notes and other material in Braille. The team also hopes to be able to make the lab accessible to students from outside the University.

The team is not going to stop here- this is just a beginning towards creating an enabling environment. We plan to be more creative, and get the required support to ensure the participation of students with disabilities in sports, moots, music, dance and the university life in general.

“Your knowledge is your vision.”

This article was written by Abhay Jain, a P-PIL Fellow with IDIA, a former member of the IDIA Odisha Chapter, and an alumnus of NLU Odisha. 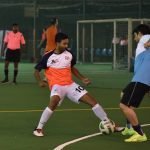 IDIA Football League 2018 – A Weekend to Celebrate Diversity through SportBlog 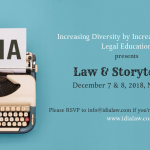 IDIA organizes its Annual Conference on Law & Storytelling in DelhiBlog