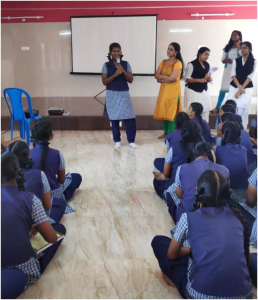 IDIA Tamil Nadu Chapter’s inaugural sensitization session for the academic year 2019-2020 was held at the Chennai Girls’ Higher Secondary School, Perambur. We must admit that this sensitization session heralded further sensitization sessions and helped shape our outlook towards such sessions. Around 1200 students were sensitized about law as a career during the said session, and 120 interested students took the IDIA National Admission Test (“INAT”) with great enthusiasm. The INAT is an internal test designed by IDIA which helps us identify those students who have an aptitude for the study of law.

This first expedition began with our Deputy Team Leader for Sensitization, Ms. Reena Thomas, phoning the principal of the aforesaid school, Ms. Selvakumari. With several schools which we had reached out to until then not having given us the go ahead for sensitising their students, we confess that we did not have much hope when we first called the principal. However, little did we know that our despaired hearts were going to be gladdened, for not only did we receive the go ahead from the principal but the students in this school brought a new vista to our future sensitizations. 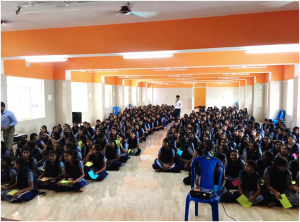 We were graciously welcomed by the school. Such was the response that we had to conduct the sensitization in two parts – a first for us. The first part of the sensitization was done on the 28th of June, 2019 followed by the second part on the 5th of July, 2019. On both days, the higher secondary students attended the sensitization. Our Team Leader, Vijayakrishnan R.P and Deputy Team Leaders, Bagavathy V (Mentorship), Jayashree Vasudevan (Training and Teaching) and Reena Thomas,  along with an assiduous team of members from the IDIA Tamil Nadu Chapter, elucidated on how law was making a headway in the society and myriad career opportunities that a good legal education opens up for students.

The students with their genuine interest, enthusiasm and smiles left us with a sense of pride and fulfilment at what we had an opportunity to do. The consecutive sessions did not deter the students’ spirits but only kindled their thought process leading them to want to know and learn more about law and the study of law. We took them through the array of experiences and knowledge which could be acquired by pursuing law as against more conventional career options. During the course of the sessions we realised that these students, deprived of guidance and awareness about the avenues open to them after school, had much potential in them; and that if properly mentored and trained, they could be moulded into successful law aspirants.

Thus, we began the sessions by briefing them about IDIA and its objectives, shattered the common dubiety about the law and lawyers, unfolded the benefits of studying law, explained the process of selection of IDIA trainees and lastly, the hard work and dedication required to gain admission to the top National Law Universities in India. 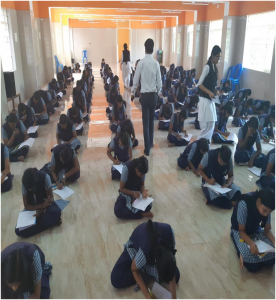 We were glad to find that our session was helpful when 120 students showed great interest in exploring a career in law and taking the INAT. These students were then administered the INAT.

The flighty children, who had had little opportunity to acquire knowledge needed to make an informed decision about their future endeavours, sure took home some beneficial information about choosing law as their career. The response from the students and the school authorities also reinforced our commitment to IDIA’s mission and helped us sensitize students from various schools in and around Chennai with fervour and determination. Over the course of the last two months, we have sensitized over 2100 underprivileged students across 8 schools. We look forward to identifying budding law aspirants among those sensitized and training them to crack the entrance exams and enter the top law schools of the country.

This post has been authored by Rezia Sapthikha.J and Aparna Raju, 3rd year students from School of Excellence in Law. They are a part of the Mentorship Committee of the Tamil Nadu Chapter of IDIA